My name is Sari van Poelje I’m the CEO of Intact Academy. We give training programs for coaches and consultants all over the world, from beginning coach to team coach to organizational consultancy. My other business is Team Agility. I’m an Agile Business Innovation Designer: I help companies innovate their business more quickly than their products.

One of the tools we use to help people change is called transactional analysis or TA for short. We’ve been talking about ego states, the building blocks of personality, how people communicate effectively. Now we’re talking about how people stay in their old stories without solving their problems. One way is to racketeer, another is discounting.

We talked about games as an unconscious, non problem solving, patterns of behaviour that lead you to a known pay-off. Eric Berne, the founder of TA, talks about psychological games using his Formula G or formula games. Every conflict or game follows the same pattern, which is lucky for us because it makes it much easier to recognize when you’re in a game.

Step 2: Exchange of Ulterior Transactions. Under stress people can move to transactions with an ulterior meaning. On the surface they look innocent and complimentary, for example: “Where did you leave my socks this time, darling?” But anyone who listens carefully and notices the non-verbal communication knows that it means something else. It might mean keep your hands off my stuff, or why do you always move my socks? This is a transaction with an ulterior meaning. These ulterior transactions can escalate if people are very set on having a game.

We can use the drama triangle model to explain the three types of ulterior transactions. 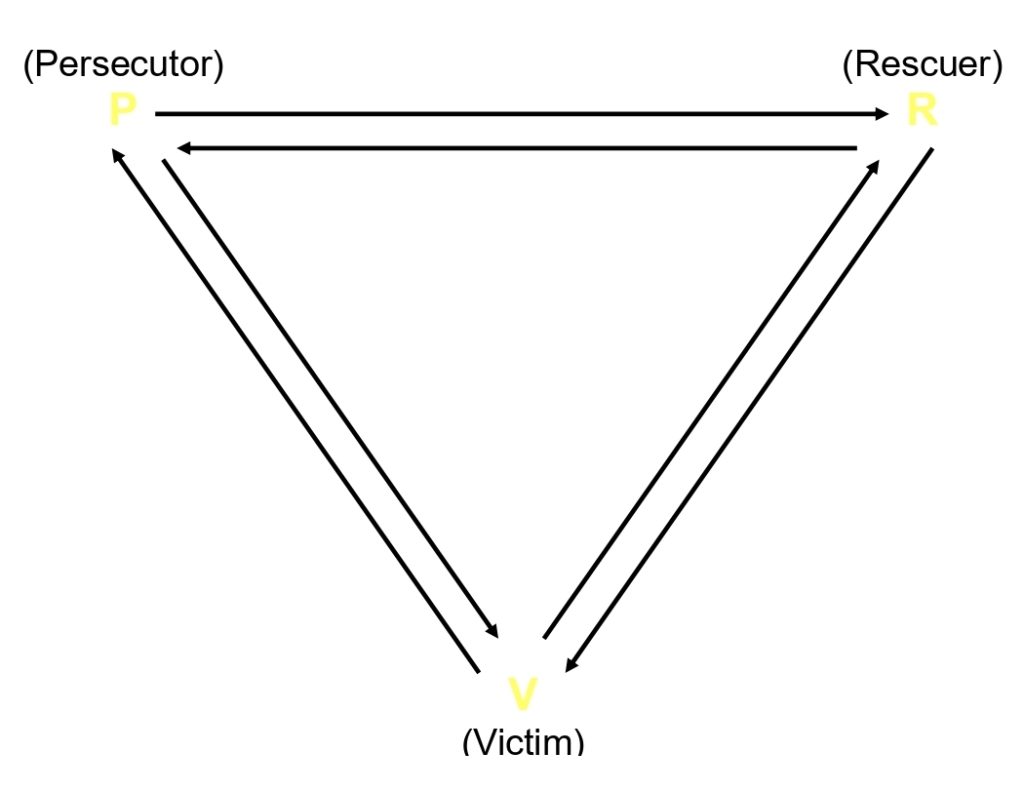 We each have a favourite plan A and a plan B.

People start games with either a Persecutor, Victim or Rescuer. Imagine that the ulterior motive to start a game is like a fishing rod. At the end of the fishing rod there’s really good chocolate. People who are stressed and want to get rid of their stress walk around fishing until someone takes the bait. Now in games conflict feels really personal, but in actual fact, anyone could take the bait.

There are three types of chocolate, let’s start with the persecutor.

Persecutor: A stressed person might go around blaming or criticizing other people. It ties in with the four horsemen of the apocalypse from last time, too. This contempt or continuous criticism, we call persecution. Persecution is when you point out what’s wrong without there being a need to or a contract for it.

If I wrote a report and asked you to point out what I missed, and you returned the report with comments in the margin, because that was our agreement, you’re keeping a contract, it’s not persecution. But if I gave you the final version, and you sent it back with everything underlined in red, with spelling and grammatical mistakes marked up without there being a contract for it or a need for it, that’s persecution.

Rescuer: The other way to start a game is by fishing to rescue people. So a rescue is when you give help when there’s no need or contract. As a leader if I lean over your desk and take over, when you never asked for help and there’s no need for it, that’s what we call Rescuing.

Step 3: Escalate. To summarise Formula G: you’re in stress and you start a game through an ulterior transaction. You say something on the surface, but underneath you’re doing something else probably from a Persecutor, Rescuer or Victim role. This escalates and at a certain moment someone takes the bait.

According to Berne’s Formula G there’s an X in the formula, a moment where we say in Dutch that the monkey comes out of the sleeve. The ulterior motive comes to the surface. It’s like being at the centre of the storm. At that moment, people have a choice. They can either leave the game or they continue the game.

Step 4: The Pay-off. If they keep on biting that bait, they usually continue to the pay-off. In Formula G the pay-off is when you end up with your favourite rotten feeling or your racket and you confirm your beliefs about yourself, others and life. For instance in the argument about who takes out the trash one person storms off feeling sad and thinking “Nobody loves me”  and “The world is a lonely place”, while the other storms off feeling angry and thinking”I always have to do everything around here”.

All of us play games. The way that games happen is you start in stress, you go through the four steps of Formula G ulterior meanings, escalation to the X with a moment of silence and then pay-off. Once you’re in the pay-off, you also have options, which we’ll talk about later.

I want you to know and recognize when you are playing games. What kind of stress gets you in that game? What is your favourite chocolate at the end of your fishing rod? And where do you end up? Because sometimes people start with the fishing rod with great chocolate, but they end up in a different role. So notice that in the coming week and we’ll speak later. 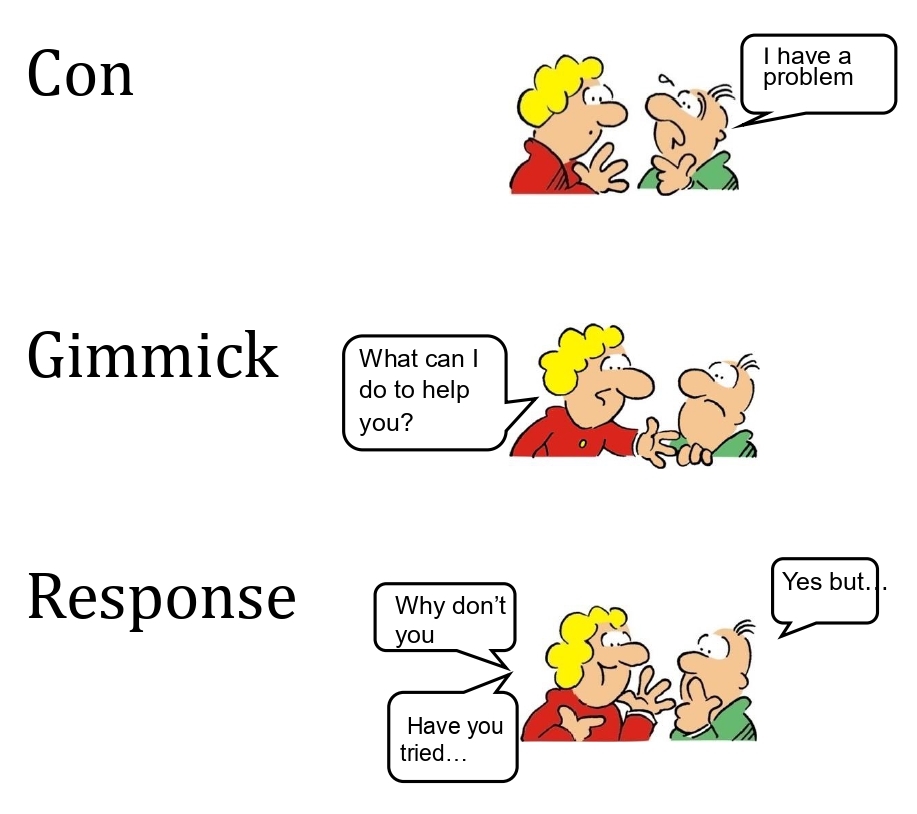 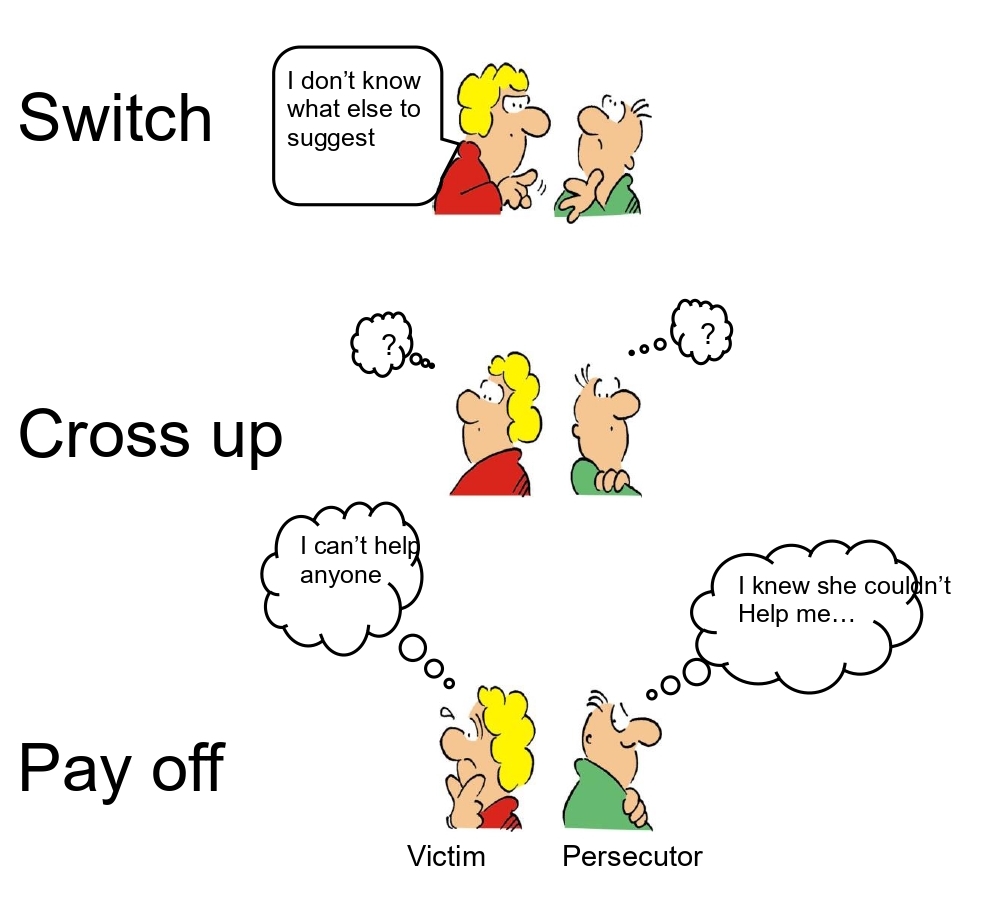