You always Have a Choice: Which Drawer Will You Open?

My name is Sari van Poelje and I’m an expert in business innovation. I’m the director of two businesses. One is called the Intact Academy where I train coaches and consultants from absolute beginners to supervisor level. The other business is Team Agility where I help businesses innovate their business more quickly than their products.

The model I use for executive coaching is called transactional analysis. TA was developed in the 1950s by a guy called Eric Berne and has been flourishing ever since, because it’s very practical and easy to explain to your clients as well. It gives models with which you can recognize behavioural patterns and help people change them. And that’s our job as executive coaches.

One of the basic concepts that we use is called ego states. An ego state is a pattern of thinking and feeling, linked to a pattern of behaviour. Read more here: Coaching with Transactional Analysis: ego states

We distinguish the Parent, Adult and Child ego states.

Parent: The Parent ego state contains the patterns of behaviour thinking and feeling that you inherited from your Parental figures. It could be your biological Parents or it could be any other Parent figure, teachers or mentors.

Child: The Child ego state contains the pattern of thinking and feeling linked to the pattern of behaviour that you learned as a Child, to survive your Childhood as it were. Sometimes it’s a reaction to what you lived through in your environment.

Adult: The Adult ego state contains the patterns of thinking and feeling linked to a pattern of behaviour that is rooted in the here and now experience and your current level of competency. So that could be you at five years old or you are 20 or you 60 years old. It contains all the competencies you have to deal with the here and now. It’s also the mediator between the Parent patterns and the Child impulses.

For example: What should I do? What would I like to do? This is what I’m going to do, is a typical example of Parent, Child and Adult response. We do that every day all the time.

You have a lot of patterns of thinking, feeling and behaviour in your Parent which are very useful in the world today. They are functional because they give you empowerment, permission, potency and protection. Some are less empowering, because they inhibit expression or growth.

You can think of this structure of ego states as the structure of your personality. You’ve got Parent which contains the program of your parents, Child which is your pattern of thinking, feeling and behaviour that you learned in your childhood, and you’ve got Adult. You can also think of them as your archive.

Imagine an archive, one of those old fashioned wooden ones, with three drawers. You can think of the top drawer as the Parent drawer, the middle drawer as the Adult and the bottom drawer as the Child. When something happens in your life you go immediately back to this archive, you pull open one of your drawers and when you open that drawer there are millions of files in there. Along the way you learnt millions of ways to think and feel and act and all of these files are linked together. 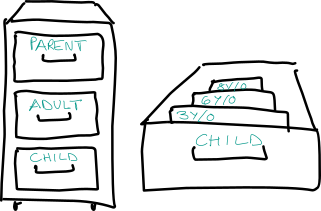 For instance, if someone holds out their hand and says, How do you do? your Parent programming says, Oh I’ve learned how to do this, and you immediately hold out your hand and shake their hand as well. This is a Parental pattern you’ve learned.

Sometimes you come into a group and some people have learned to be scared of groups in their family of origin perhaps, so they come in, open their Child drawer: Oh no! I think groups are scary, I feel scared, I’m going to sit in the corner.

If you think of your structure of personality as a conglomerate of Parent, Adult, Child ego states and if you think of that as your archive which you open now and pick out patterns that you will use in a current situation you’ve got a very good picture of an ego state model.

Now sometimes when you open the drawers and there are millions of patterns in there, but we’re kind of lazy, so most people pick the patterns that are at the beginning of the file. Your brain is lazy. It’s used to selecting the things you use most. But you’ve got millions of files in there. Sometimes you’ve got to reach back a little bit and find a file which is more appropriate to the time today.

This is one reason why people do what they do – they have these files but they pick the ones they’re most use to. I’m thinking of my friend who’s basically married the same woman four times, but each time in a younger version. They pick the file that’s at the beginning of the drawer.

You can also imagine this archive as a conglomerate of millions of folders, where some of them are RED and some of them are GREEN. And because we have what Freud called repetition compulsion we are apt to pick the patterns that are somewhat red because it validates our patterns.

I had a client who, every time she did a project had great results but it was always too late. Every time she delivered a project late she’d get a scolding from her manager. She came to me for coaching to figure out what she was doing. We looked at this archive of the three drawers and their red and green patterns of thinking, feeling and behaviour. I asked her what happens when she starts a project. She responded: Well, I opened the Child file and I look in there and I think it’s really exciting, but I have to do well because I’ll get punished.

I asked if that file was red or green and what it said.

Well I think it’s red. If I open that file it says: “You have to do well because else your Parents won’t love you”. But at least if I get punished I get attention….

This seems like a really extreme example but we all have these files that we use at work or in private life. I asked her how she felt.

I asked her what kind of energy being sad and scared brings to her project.

Well I’m not fully there. I don’t use everything, all my full potential because I’m also busy with this kind of internal conversation.

I asked her to look in her Parent drawer to see if she had red or green files there. The first file she picked was red.

I have green files but I don’t use them. This red file is about my father. He said: If you don’t do well in life you’ll never do better than I did.

And she started to cry.

That’s a burden but it’s also a huge permission to do well. She never saw it that way. We talked a little bit about her father. She told me he started from nothing, left home when he was very young, built his own business and was very successful. But he told her that going from nothing to being someone is a very hard route. He taught her that she always had to work hard. But she didn’t always want to work hard so she didn’t always obey.

She didn’t see it as a permission, she saw it as a limitation.

At some level she was still protesting against this limitation instead of taking it as permission.

Our personality is built up of ego states – Parent, Adult, Child – and you can think of that as an archive. And when you think of it as an archive you can imagine that you’ve got millions of possibilities of behaviour. Sometimes you’re lazy you pick the ones to hand, which might confirm your old story. And sometimes you pick RED. But you have the choice! You can pick something that’s further back in your drawer, and you can always pick green.