My name is Sari van Poelje. I’m the director of Intact Academy. We have eight different programmes where we train coaches and consultants, from beginner coach to supervisor, team coach to organisational consultant. I am also the director of Team Agility, where for 35 years I’ve been implementing Agile Business Innovation all over the world. If you want to know more, please go to www.IntactAcademy.com or www.TeamAgility.com.

Erik Erikson talked about different development stages, and I want to link it to the need for group membership. 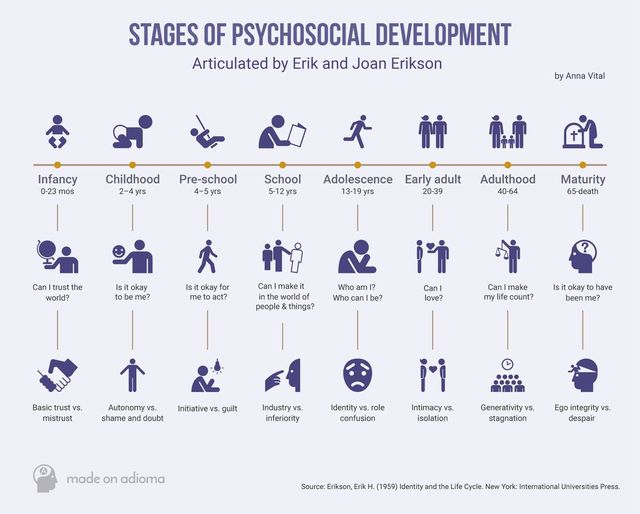 First stage of development between zero and two years old is of basic trust versus mistrust. One example is when a baby sees their mother leave and come back again, they learn basic trust.

This relates in a way to the adult need for recognition, and to feel safe.

Sometimes I’m called into groups as a consultant, because they’ve had six different leaders over a period of two years, or they have a leader who is present but absent at the same time. Often I can see where the group switches from a basic trust position to a mistrust position. In a group, one of the basic needs of membership is safety. It links to our basic survival needs. When you join a group or when a group has transitioned, you always go back to need for safety first.

The second stage of development that Eric Erikson described, is the development of autonomy versus shame and doubt. In TA we say the split of the functional symbiosis with the mother, where the child differentiates their own identity.

This relates to the need for autonomy in work and in groups.

I am doing team coaching for a team in Paris. The founder is one of the managers in the group, and he confuses the roles of ownership and management sometimes. If one of the engineers does something he wouldn’t, he starts to micromanage. We all need autonomy. This is a very fine balance to negotiate, and I hope I’m helping them with that.

The third stage of development according to Erik Erikson is initiative versus guilt. A child learns to walk, they start to explore on their own, and then feel guilty if they do things outside of the parental sphere.

This relates to the adult’s need to take initiative.

The same is true in groups and in society, your need to take initiative is very important. I talked about the need for impact versus the need for power and I think this is one of those clear areas where the need for initiative comes out. In groups that are extremely regulated with a very traditional leadership, where the leader still thinks that they’re the ones who control the what and the how, that this area for initiative and impact is very constrained.

In the army, you just have to do what you’re told, right? The room for initiative is very small. However, everybody has this group need for impact and initiative. So the trick is, as a leader of a group and of society, you have to give direction and structure, but the how, as much as possible, you should leave the initiative to the members. That’s what you pay them for anyway ☺ else you shouldn’t be giving them such high wages!

The fourth stage of development Eric Erikson talks about is the need for industry versus inferiority. On the one hand, you want to act autonomously and take initiatives without being punished. On the other hand, you have to know your place in the world. This is maybe a really bad metaphor, but I’ve got a puppy who is six months old – dog puberty. She’s learning ranks and places in the hierarchy of dogs. When a dog comes along she has to sit and wait to let the dog sniff her. If she stayed standing up she would appear aggressive to other dogs and she would get into a lot more fights than she is now.

This might be a weird thing to say, but I think it’s probably the same in groups. You have to be able to act with a sense of trust, but to be able to do that you have to also learn to negotiate your position in a group.

This relates to the need for an adult to learn skills and to do socially recognised work.

If you want to become or stay a member of a group, and if you want your members to stay there must be recognition for work. People want to contribute and be recognised. If you look at all the research on happiness, we know that contribution is the thing that makes people happy – contribution to others. Being rich or famous in itself has no value. If with that fame, you can do something for others, then it has value. Being able to contribute is one of the basic group needs as you get older. You go from wanting to be safe, to being autonomous, to taking initiative and to being recognised for contribution.

The fifth stage of development for Eric Erikson is identity versus role confusion, it’s like adolescence. Young people really change identity and experiment with identity a lot during this stage.

This links with the adult need to be able to shift identities in their work in a group.

Sometimes in a group that’s been in existence for a long time, you see that someone is stuck in their role. The same thing in a long term marriage, people get stuck in a certain role. If they have no room to shift identities in their marriage or their group, people get really resistant and rightfully so, because being able to experiment with identities, is also a basic need in a group.

When I lead a group, I don’t have the same people doing the same thing all the time. I shift roles, also psychologically within a group, because that gives people a sense of growth and of experimentation. They get to know who they are through trying out different roles in a group.

This relates in a group to the adult needs for affiliation, to be in a supportive community of colleagues.

As time goes on the individual needs in a group also change. This need for intimacy versus isolation is needed if you want to feel safe, then to be autonomous, then to make impactful contributions, develop your identity in a group and then having formed your identity, you can be in a relationship.

You can be in the most intimate relationships if you know who you are, but to know who you are you have to have had that previous stage in which you can experiment. It’s the same thing in a marriage. Sometimes people feel close, sometimes they feel more part. That’s normal if you’re in a long term relationship. Life wouldn’t be so interesting otherwise. Both in the marriage and in a group it’s important that you have this chance to experiment. Know yourself before you get into that affiliated state. Because otherwise, who are you relating to? You start to merge if you don’t know yourself. You start to blur your boundaries, and that means that you run the risk of losing yourself.

Erik Erikson talks about how you mature as you grow older.

As a member of a group, you have to continue this feeling of creativity and also legacy.

When people have been in a group for a long time, they might want to move on but they want to leave something behind as well. As a good leader, you give people who are moving on a chance to leave behind their legacy. This might be a piece of paper where they hand over to someone else, but that’s the cheap form of doing this. The better way is to organise group meetings where people can share their knowledge and their experiences. I’m not talking about knowledge, intellectually, I’m talking about deep knowledge. You know, what they learned during 30 years in the group, on the job. When you’re a mature group member your need for generativity, for legacy and for creativity is still there.

The last stage of development Erik Erikson talks about is the need for ego integrity versus despair. The end of an adult life there is the need to create meaning out of the experiences you’ve had.

It’s the need to become more of an advisor, or a sparring partner in a group.

As an older group member, as in marriage, this last stage of group development is about wanting to create meaning out of what you lived in the group and being able to impart that to others.

The most beautiful example of that is in IKEA. IKEA used to have a policy where people over 55 automatically were degraded one level and got a mentorship job for the 20% of their time. They formalised this need for meaning and transference of knowledge. I think that would be a great thing to do in more groups.

The question I want to leave you with after having gone through these eight stages of development is what stage do you think you’re at? What need is prevalent for you at this stage of your group membership? And how could you meet that need more? What do you need to ask other people and of your leader to be able to fulfill that need?